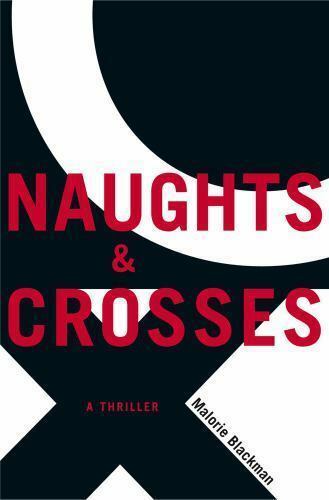 Malorie Blackman’s YA sci-fi adventure Noughts and Crosses (in the US: Black & White).

In Albion, a near-future, alternate-reality England, although Africans long ago colonized Europe and enslaved white-skinned people, today slavery has been abolished. However, the so-called “crosses” (Brits of African descent) oppress the “noughts” (native Britons) and maintain their own privileged status through political, economic, and cultural means. Persephone “Sephy” Hadley, daughter of a powerful cross politician, grows up with Callum McGregor, the son of her nanny and one of the few noughts to attend her elite school. Although the two are close friends, they drift apart after Callum is forced to leave school… until Callum, who has since drifted into the orbit of a violent paramilitary group seeking to overthrow institutionalized racism, helps them kidnap Sephy. (Considered one of the most influential recent books in British literature, Noughts and Crosses alternated between Sephy’s and Callum’s perspectives.) When Sephy learns that she’s pregnant, she faces an impossible choice.