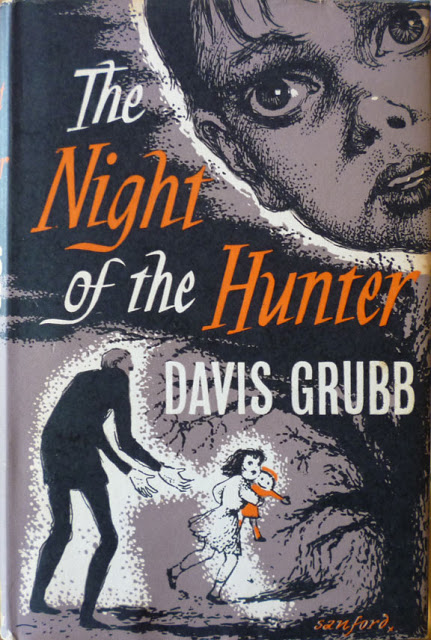 Davis Grubb’s Southern Gothic thriller The Night of the Hunter.

“Preacher Harry” is a religious fanatic and serial killer who — while serving time in prison for car theft — shares a cell with Ben Harper, a condemned man who’s killed two people in the course of robbing his hometown bank of $10,000.00. Harper takes the secret of the loot’s hiding place to his grave — despite the efforts of his wife, Willa, and cellmate to learn it. Released from jail, Preacher Harry makes tracks to Harper’s home town, where he soon marries Willa. The tension builds slowly; in some ways, The Night of the Hunter is as much an Agee-like documentary of life among impoverished Southerners as it is a psychological thriller. However, 10-year-old John Harper knows where the money is hidden… and he knows that his new stepfather is up to no good. When Willa is killed, John and his young sister, Pearl, escape down the Ohio River in their father’s old skiff, trailed by Preacher Harry… who can be heard singing a mournful hymn whenever he grows nearer to them!

Fun facts: Grubb based the plot of The Night of the Hunter on the true story of serial killer Harry Powers, who was hanged in Grubb’s hometown of Moundsville, West Virginia, in 1932. Charles Laughton directed the terrific 1955 movie adaptation, starring Robert Mitchum, Shelley Winters, and Lillian Gish.