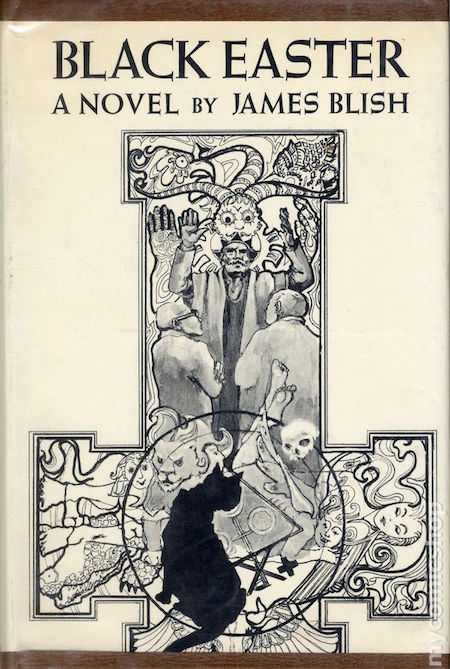 A fascinating novella about an arms dealer who hires a black magician, Theron Ware, to assassinate California’s Governor “Rogan” before unleashing all the demons of Hell. In this alternate Earth, sorcery and the ritual magic for summoning demons, as described in Ramon Llull’s Ars Magna (1305), say, or the Enchiridion of Pope Leo (c. 1633), work. That’s kind of the whole plot, but the framework of rules and regulations within which the magicians operate is persuasive; and Ware is a compelling character. His description of black magic as a science and an art reminds me of my own field, commercial semiotics: “Given [the right] books, you could learn almost everything I know in a year. To make something of the material, of course, you’d have to have the talent, since magic is also an art. With books and the gift, you could become a magician… in about twenty years. If it didn’t kill you first, of course…. It takes that long to develop the skills involved.” A group of white magicians — named after sci-fi authors, ha ha — are powerless to intercede.

Fun facts: A version was serialized as Faust aleph-null in If magazine. Black Easter, often published with its sequel, The Day After Judgment, is part of the After Such Knowledge trilogy — which concerns the unanticipated consequences of the search for new knowledge.