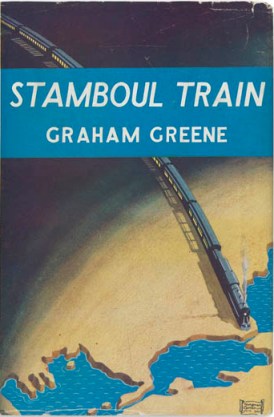 Onboard a train from Ostend, Belgium to Istanbul: an accidental collective of lost souls. We’ve got Dr. Czinner, an exiled revolutionary leader headed back to Belgrade — where the revolution has already failed; Myatt, a Jewish merchant on a business trip (he suspects his firm’s agent in Turkey has been cheating them); Coral, an ailing showgirl in search of love (who believes she has found it in Myatt); Mabel, a lesbian journalist, chasing a big story, and her young lover; not to mention a sociopathic cat burglar, a novelist, a priest, an army major, and a luxury-loving police chief. Over the course of the three-day journey, there’s sex, murder, robbery, and a trial. Myatt, who faces anti-Semitism both on and off the train, travels back to Subotica to rescue Coral, when she disappears.

Fun fact: Of this novel, Greene said: “In Stamboul Train for the first and last time in my life I deliberately set out to write a book to please, one which with luck might be made into a film. The devil looks after his own and I succeeded in both aims.” It was adapted as a movie in 1934.