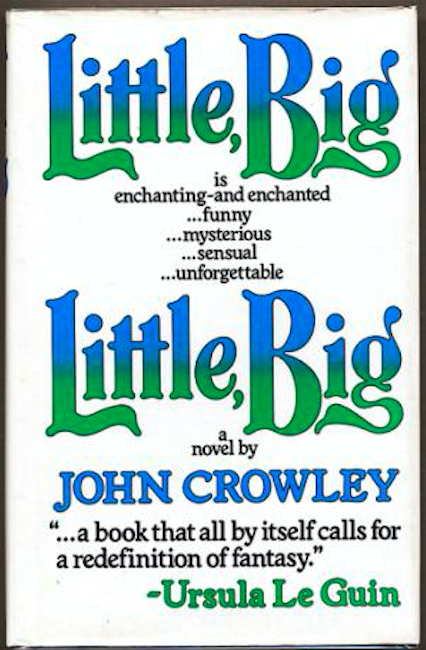 Though often described as a fantasy novel — it won the World Fantasy Award in 1982 — Little, Big is a sprawling family saga reminiscent of Dickens or Flaubert. Smoky Barnable travels by foot from the City (New York?) to a place called Edgewood, not found on any map, to marry Daily Alice Drinkwater, and to live with her family in a house that may or may not teeter on the magical border of an otherworld. It’s a realistic domestic epic — we learn about four generations of the Drinkwaters — that begins at the turn of the twentieth century and ends in a future America ruled by a Trump-like despot. The Drinkwaters believe that they are each part of a grand supernatural Tale; and that their fates are intertwined with that of the occluded world of faerie. A slow-paced, intricate, enchanting yarn best read in a hammock, IMHO.

Fun fact: According to Harold Bloom: “A neglected masterpiece. The closest achievement we have to the Alice stories of Lewis Carroll.”