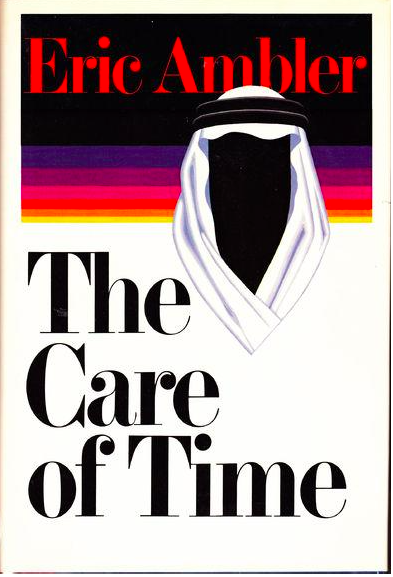 When Karliss Zander, a notorious international fixer for terrorists, mails a defused bomb to Robert Halliday, freelance writer, former TV host, and ex-CIA op, it comes with a job offer. Zander wants Halliday to help him edit the memoirs of a 19th-century Russian terrorist (Sergey Nechayev, whom we associate with “the propaganda of the deed” notion) and ghostwrite an exposé of modern terrorist governments. What Zander actually wants, however, is for Halliday to pose as a TV host interviewing an Arab prince known as “the Ruler”… who has ulterior motives regarding biochemical warfare… as part of NATO’s secret negotiations with that country to build a military base in the Gulf… so that NATO will provide asylum to Zander and his beautiful daughter… who are being threatened by a Middle Eastern terrorist group. (Hello, Chuck Barris’s Lying to Tell the Truth.) Later, the Arab prince and his gunmen will do whatever it takes to retrieve Halliday’s interview tapes!

Fun fact: Ambler’s novels from the 1930s through the 1960s are his best work, but this is one of his strongest late novels. PS: Sergey Nechayev was the inspiration for Dostoevsky’s The Possessed.