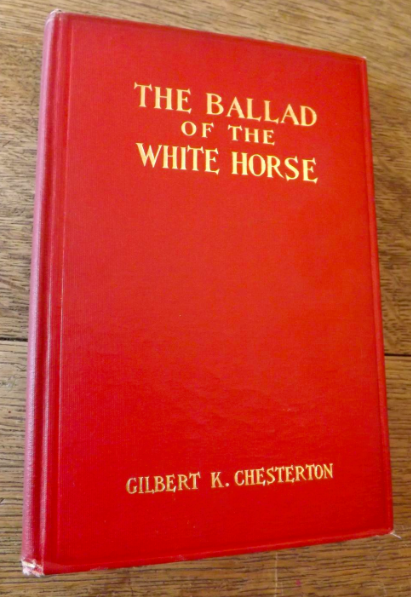 G.K. Chesterton’s The Ballad of the White Horse.

An epic poem (one of the last great traditional epics written in English) about King Alfred of Wessex’s rout of the Great Heathen Army of invading Danes, circa the year 878, at the Battle of Ethandun/Edington — thus preserving British Christendom. The invaders are nihilists, who believe that “the soul is like a lost bird,” and “the body a broken shell.” Inspired by a vision of the Virgin Mary, Alfred musters British chieftains — Eldred (a Saxon), Mark (a Roman), Colan (a Gael) — and the two forces clash. The action is bloody, there is a magic spear, stirring speeches are made on both sides, the Danish chief converts. After the battle, Alfred and his followers scour the weeds which have grown over the prehistoric Uffington White Horse — an act intended to remind British Christians never to relax their vigilance.

Fun fact: Eldred, Mark, Colan, and Alfred represent aspects of Christian theology; and the Danish leaders represent aspects of Nordic myth. One of Robert E. Howard’s favorite poems, and an influence on battle scenes in his Conan stories. PS: Bram Stoker’s bonkers The Lair of the White Worm appeared in the same year; I feel like someone — perhaps James Parker — should write a mashup.