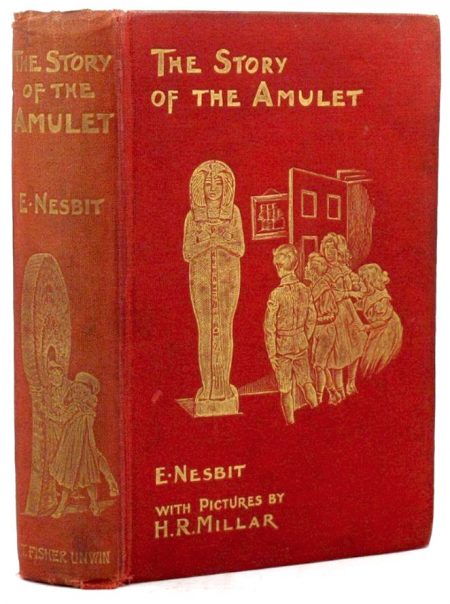 Edith Nesbit’s children’s fantasy adventure The Story of the Amulet.

When Cyril, Anthea, Robert, and Jane — the four older kids from Nesbit’s earlier books Five Children and It and The Phoenix and the Carpet — purchase half an Egyptian amulet from a London junk shop, they discover that they can travel through space and time, in search of the amulet’s missing half. They meet Julius Caesar on the shores of Gaul; visit the lost continent of Atlantis; sail aboard a ship to “the Tin Islands” (ancient Cornwall); and bring to London the Queen of Babylon — who marvels at how badly the slaves [working people] appear to be treated. (C.S. Lewis’s Jadis-in-London scene, from The Magician’s Nephew, is an homage.) This last installment in Nesbit’s Psammead trilogy isn’t the best — but it’s still extraordinary, because of Nesbit’s deep sympathy with the way that children think and perceive, her dry wit (which adult readers will appreciate), and the way she always makes magic’s laws a puzzle to be solved. The book is marred, alas, by anti-Semitism… and, perhaps, by a bit of Fabian preachiness.

Fun fact: When the children visit a British utopian social order, in the far future, they discover that H.G. Wells is venerated as a prophet. Nesbit and Wells were friends; in a funny letter from the period, Nesbit recounts that Wells mansplained time travel to her, which is why she pokes a bit of fun at him in this chapter.