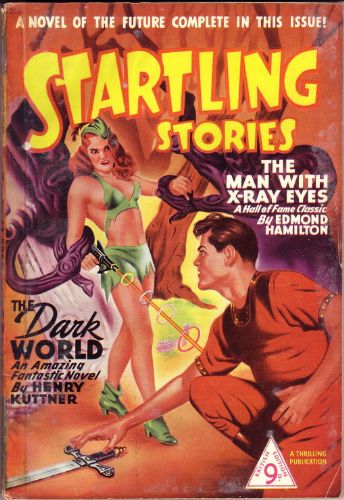 Whisked — from the Pacific theatre, during WWII — through a dimensional portal into the Dark World, a fantastical version of Earth where mutants rule — Edward Bond finds himself possessing the body of the wizard Ganelon, head of a tyrannical coven of evil werewolves and witches. As is common in the science fantasy of the era, we find rational explanations for fantastical creatures such as the vampires and werewolves. Ganelon, meanwhile, is transported into Bond’s body! Bond works to free the Dark World from Ganelon’s tyranny… all the while persuading the coven’s members that he is, indeed, Ganelon. (Hello, Star Trek‘s “Mirror, Mirror” episode.) There’s a sacrifice-demanding entity known as Llyr, who is strongly reminiscent of a Lovecraftian elder god. Freydis, a good witch, leads a rebellion of forest-dwelling creatures against the coven. Things get even more complicated when Ganelon returns to the Dark World, his body now housing two distinct, and opposed, minds and personalities.

Fun fact: The novel was first published in the July 1946 issue of Startling Stories. Ace issued the first book version in 1965. C.L. Moore and her husband, Kuttner, co-authored a number of books without attribution; sf scholars tend to agree that Moore should receive co-author credit for The Dark World.