Hop tip! Here’s a terrific holiday gift for someone in your life who enjoys graphic novels. 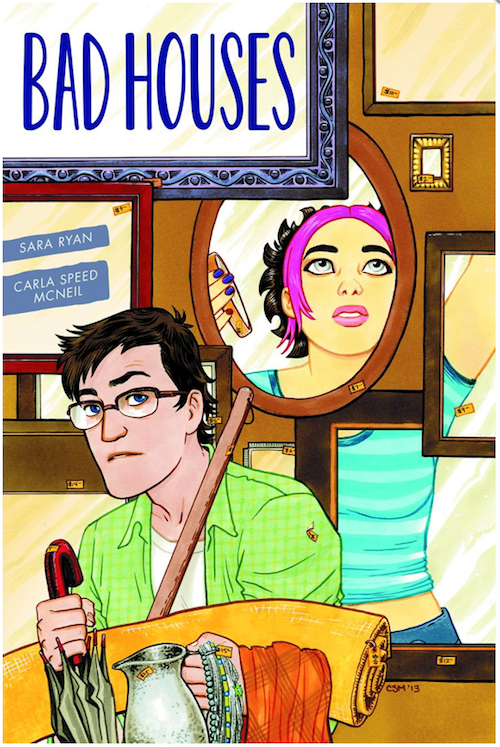 HiLobrow friend Sara Ryan — author of the YA novels Empress of the World and The Rules for Hearts — has written her first graphic novel, Bad Houses. It’s great.

Illustrated by Carla Speed McNeil (best known for the science fiction comic book series Finder), Bad Houses (Dark Horse) tells the story of two teens investigating old houses — inhabited by hoarders — in their once-thriving hometown of Failin, Oregon. It’s like Elizabeth Enright’s Gone-Away Lake for hipsters. I mean that in the best possible way. Will Anne and Lewis succumb to their elders’ fate and become bitter and disaffected? Not if they can crack the town’s mystery together.

Publishers Weekly starred review: “Ryan’s well-rounded sympathetic characterization and the scrappy energy in McNeil’s art make this a drama with true depth.” Paste Magazine: “Bad Houses is not only notable among Dark Horse’s large catalog, where it could easily lie buried, but it deserves your attention as an excellent quarter life crisis work of graphic art.” Warren Ellis: “This is the best graphic novel I’ve read all year. Superbly observed, exquisitely drawn, with a sharp bite and a real human pulse. Magnificent.”