Over at the great site Shorpy today, a 1911 photo (by Lewis Wickes Hine) of a group of boys who work in the Sagamore Manufacturing Co., in Fall River, Mass., reveals something odd.

That boy by himself — off to the side and rear — leaning against the fence like he’s got something way more important to do than be photographed. What is that shiny, palm-sized object at which he’s looking so intently? Why is he using his thumb in that particular way? 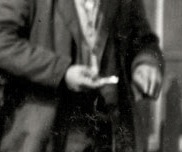 Yep. It’s yet another PLUPERFECT PDA.

Thanks, Matt, for the tip.