Boot Me Up, Scotty 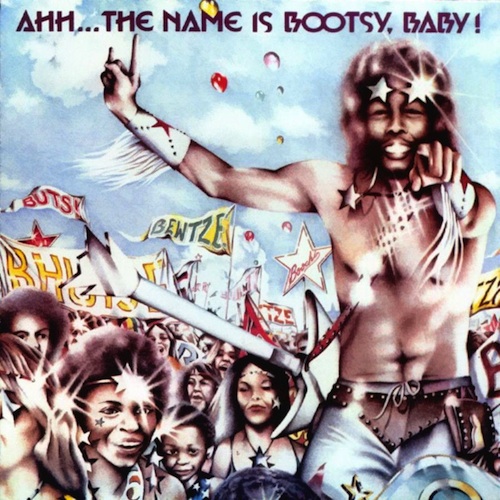 Over at io9, our friend Charlie Jane Anders (whose work has appeared here at HILOBROW) interviews (future) HiLo Hero Bootsy Collins, teasing out some of the science-fictional ideas behind his far-out body of work. Excerpt:

io9: After Star Wars, every pop group and soul group was doing science fiction songs. But you and George Clinton started doing that way earlier. Where did that come from?

Bootsy: Well, I think we kind of grew up in that, and it always intrigued George. It always intrigued me. George really helped me with it, and I kind of grew up with it on TV, watching Star Trek, Lost in Space, Flash Gordon, I mean all of this stuff. Reading the comic books. And then George got me into really reading books. Chariot of the Gods, The Naked Ape, all these kind of books. Cloning… I can’t remember the authors right now, but I still have the books — the original books that I got when George and I used to go fishing.

And speaking of Star Trek — William Shatner — you know, I’m actually doing a record with him, and that’s like a dream come true. And then doing animation stuff. I mean, watching this animation stuff, and being a part of animation, I’ve always been a part of it because we got those kind of characters naturally. So science fiction always intrigued us and we figured — well, actually, George figured — let’s just make it a whole concept, we don’t even have to try to play the parts. We are those parts. On stage, it’s just a big mothership. It’s a spaceship with all these space aliens on it. And we considered ourselves space pimps.

io9: How was the transition between the psychedelic era of P-Funk and the science fictional era? Was it overnight, or gradual?

Bootsy: Well, coming out of the psychedelic era made it that much more real, and that much more easy. Because when you’re tripping, you see all that kind of stuff anyway. And it becomes more real, and because really for me, it is real. Science fiction for me is really science faxtion. It’s really a fact. This is closer to the way it is than what we think.

We think we’re the smartest beings that is being, but that’s dumb right there. And it’s like, not really wanting to face the fact that the universe was here before we even got here. We’re just experiments. Before, you know, with the dinosaurs, with the land of the giants. With the horses, and horse-butt, and then the man-face — all those things were experiments that went bad. We’re actually the results of an experiment that went halfway right. But we’re still not there, we just kind of took over. The ones that brought us here, they kind of left us and kept an eye on us to see what we’re going to do.

And now we’ve taken another step and we’ve created the smartphone, and we’re leading the way back to where we came from.

io9: What do you mean, back where we came from?

Bootsy: Well, you talk about aliens and people from other worlds and all of this kind of thang. And we are actually at the forefront of that. We are evolving into these beings: part robot, part human. That’s really us. That’s going to wind up being us. Because that science fiction stuff ain’t really science fiction. That’s where it’s going.