Notes toward a musical based on DIPLOMACY, a strategic board game set in Europe just before the beginning of World War I. Invented in 1954, DIPLOMACY features no dice or other randomizing factors; instead, seven players representing major European Powers must negotiate privately between each move. This is the fourth in an occasional series. 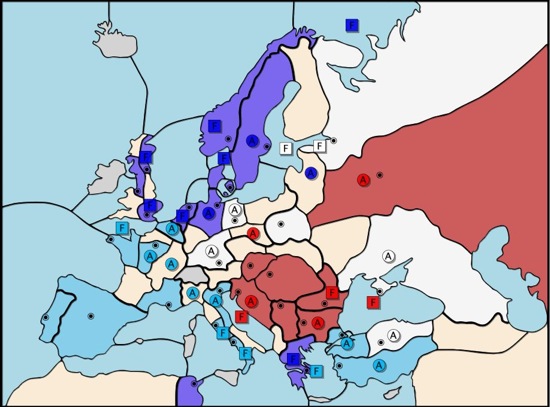 Armand Fallières (President of France): Have you ever went over to Venice to eat
And the food just ain’t no good?
I mean the fegato alla veneziana is mushed
And the anchovies taste like wood?
So you try to play it off like you think you can
By saying that you’re full,
And then the Emperor says, “Armand, you’re just being polite
You ain’t finished, uh uh, that’s bull!”
So your heart starts pumping and you think of a lie
And you say that you already ate.
And the Emperor says, “Armand, there’s plenty of food!”
So you pile gnocchi di melanzane on your plate.
While the stinky tagliatelle’s steaming your mind starts to dreaming
Of the moment that it’s time to leave.
And then you look at your plate and your baccalà’s slowly rotting
Into something that looks like cheese.
O, so you say, “That’s it, I got to leave this place.
I don’t care what these Austrians think.
I’m just sitting here making myself nauseous
With this ugly polenta that stinks.”
So you bust out the door while it’s still closed,
Still sick from the caparossoli bite,
And then you run to Rome for quick relief
from a tincture of Kaolinite.*
And then you call the Emperor two weeks later,
To see how he has been,
And he says, “I understand about the food,
Democratically Elected President of France, auf wiedersehen.”

* Kaolinite: A clay mineral with the chemical composition Al2Si2O5(OH)4. The name is derived from Gaolin in Jingdezhen, China. Kaolinite was first described as a mineral species in 1867 for an occurrence in the Jari River basin of Brazil. A traditional use is to soothe an upset stomach, similar to the way parrots (and later, humans) in South America originally used it. Later, it will be used as the active substance of Kaopectate. 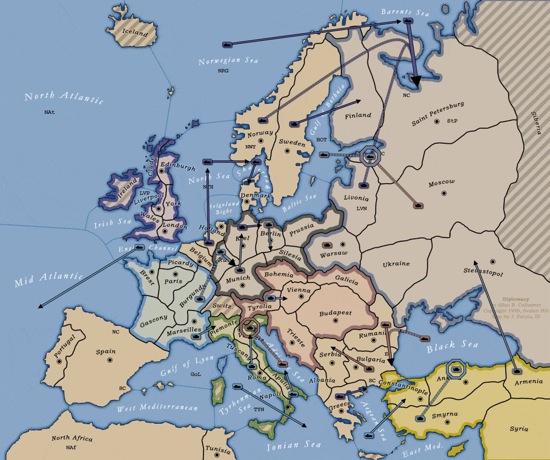 Franz Joseph (Emperor of Austria-Hungary): Vienna, my mistress,
your white terraces are seething with Frenchmen,
your salons ring with their cheap laughter.
They are weak and decadent, they have inadequate moustaches,
and yet they have taken you, my mistress, my pride,
my pastry in the red oven-heart of Europe.
What is to be done? What?
I confess my spirit is broken. Yes, I the Emperor Sigmund confess it!
Were it not for the friendship of the Tsar,
that excellent fatalist, that veteran of burning palaces,
I might pack it all in.
But wait… What? You speak to me?
Vienna, I believe you are speaking to me.
My love, my white-thighed city of delights,
you are saying: Kill them all.