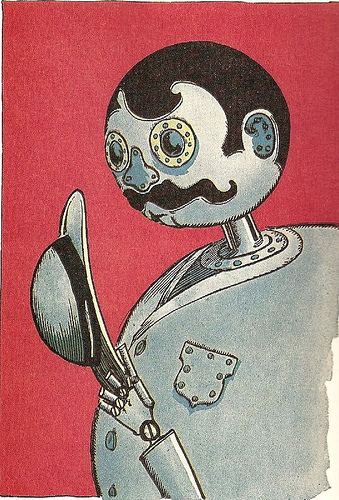 Notes toward a musical based on DIPLOMACY, a strategic board game set in Europe just before the beginning of World War I. Invented in 1954, DIPLOMACY features no dice or other randomizing factors; instead, seven players representing major European Powers must negotiate privately between each move. This is the second in an occasional series. 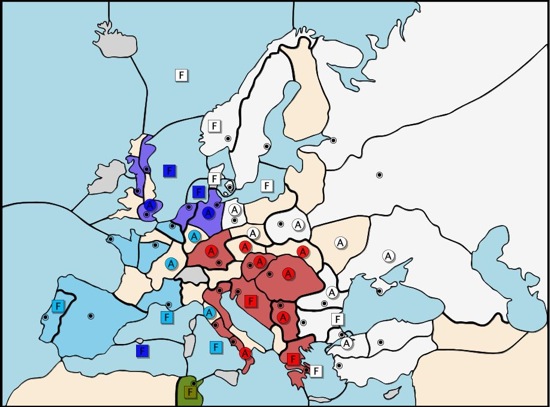 TSAR: …So Armand [Fallières, President of France] says to me, he says, “Oui, mon cher! I’ll invade Munich! With your support, our mutual war on Austria can’t fail!”

KING: Ha ha ha ha ha! You didn’t ever intend to support the Frog, did you?

TSAR: What do you think? Ha ha ha! I’ve never even been in a fight! I let others do the fighting for me.

KING: Ha ha ha! And meanwhile, the foolish democrat is helping me invade Tunis! And leaving Holland alone! All because you…

TSAR and KING: fooled him into thinking we’re on the same side! HA HA HA HA!

Wiping his eyes, the Tsar pours two glasses of wine, and the monarchs toast one another.

TSAR: This time next year, we dine in Paris!

TSAR: No, you can’t eat Fabergé eggs, how many times must I…

Enter a man muffled in a tattered and bloodstained French military cape. His face is obscured by a hood. He stomps heavily across the floor.

TSAR: Aha, this must be the envoy from Armand. How did the invasion of Munich go, eh?

KING: I say, old boy, what are your boots made of? Lead?

MESSENGER: The President presumed that he could rely on support from Russian troops.

TSAR (addressing the King): And what happens when a democratically elected leader presumes?

KING: He makes a PRES out of YOU and ME. Ha ha ha!

KING: I set ’em up, and you knock ’em out of the cricket pitch!

TSAR: Too bad Armand is too blind and stupid to perceive the truth.

The sounds of war resolve themselves into a distinctive guitar riff and thundering bass drum. The Tsar and King break into song.

TSAR: Has Armand lost his mind?

KING: Can he see or is he blind?

TSAR: Can he walk at all?

KING: Or if he moves will he fall?

TSAR: Is he alive or dead?

KING: Has he thoughts within his head?

TSAR: We’ll just pass him there.

KING: Why should we even care?

MESSENGER (singing): He was turned to steel/In the great magnetic field.

TSAR (startled, speaking): Magnetic field? My spies tell me that the Serb Tesla has learned to send electrostatic forces through natural media across a conductor situated in the changing magnetic flux, and to transfer power thereby to a conducting receiving device. If Armand has indeed passed through such a magnetic field, perhaps he’s…

MESSENGER: When he traveled time/For the future of mankind.

TSAR (still speaking): Time travel, eh? My spies brought me the French ‘pataphysician Jarry’s notes on “How to Construct a Time Machine,” but I must say — I didn’t think they were…

KING (who hasn’t paid attention to the interruption, still singing): Nobody wants Armand/He just stares at the world.

MESSENGER: Planning his vengeance/That he will soon unfurl.

The Messenger flings off his cloak. It is Armand Fallières, President of France! His body seems metallic.

PRESIDENT: Now the time is here/For Armand to spread fear/Vengeance from the grave/Kills the people he once saved

TSAR (defiant, singing): Nobody wants him!

PRESIDENT (singing): Nobody helps him/Now he has his revenge!

The King turns around, shrieks. The President pulls his sword out of the Tsar and turns on the King, stomping towards him heavily.

The King rushes from the tent.

PRESIDENT: Running as fast as they can/Armand lives again!