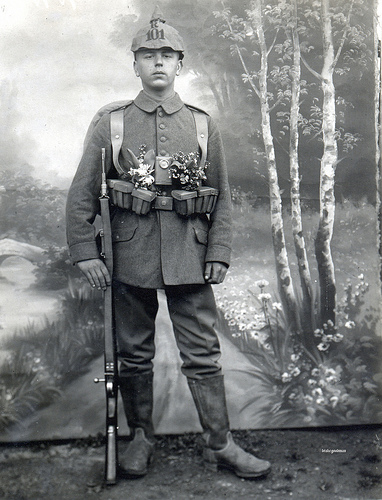 Notes toward a musical based on DIPLOMACY, a strategic board game set in Europe just before the beginning of World War I. Invented in 1954, DIPLOMACY features no dice or other randomizing factors; instead, seven players representing major European Powers must negotiate privately between each move. This is the first in an occasional series. 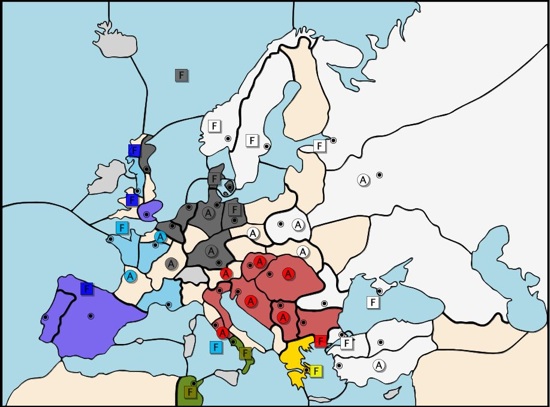 Sultan Abdul Hamid II (TURKEY): Enraged with a knife, I don’t care who I slice, I could walk into the woods and kill a bear with my fleet in the Aegean Sea.

Emperor Franz Joseph I (AUSTRIA-HUNGARY): I got so much trouble on my mind! Re-FUSE to LOSE! Here’s your ticket. Hear the drummer get wicked. And hear the groans rise from a battlefield strewn with dead and dying Russians, Frenchmen, Germans, Turks, Italians, and Englishmen.

Kaiser Wilhelm II (GERMANY): I got a letter from the Austrians, the other day. I opened and read it. It said they were SUCKERS. They wanted me for alliance or whatever. Picture me giving a damn? I said NEVER. Here is a land that never gave a damn about a Kaiser like me, you know. Because they never did. I wasn’t with it but just that very minute it occurred to me: the sucker had eight armies.

President Émile Loubet (FRANCE): I sailed into the Tyrhennian, Italy started to scream. Austria busted in — what a fucked up scene. Cannonballs all fired, blood up to my knees. Wait Franz, wait Joseph, wait, wait, please! My bad about Austerlitz and the Place Vendome… The Emps fucked up my Rome.

Sultan Abdul Hamid II (TURKEY): Fuck tha Tsar, please. Comin straight from the Ottoman. The Sultan got it bad cuz I’m brown and not the other color. So the Bear think he has the authority to kill a Turk dynasty.

Tsar Nicholas II (RUSSIA): Like I said before, I rock hardcore. I’m DJ Russia, I can scratch. I’m DMski, I can draw. And now I got the knack, to attract. My rhyme’s an aphrodisiac. I’ll reign on your brain and rock your knot. When it comes to the Turk, give it all I got. To rule the Balkans, I got what it takes.

President Émile Loubet (FRANCE): I make big money, I drive big cars. Everybody know me, it’s like I’m a movie star. But late at night, somethin’ ain’t right. I feel I’m being tailed by King Edward’s head lights. Here he come into Portugal, just like I figured. I got my hand on the motherfucking trigger. What I saw’ll make your ass start giggling — Marcel Proust drinkin’ his tea with a madeleine.

Tsar Nicholas II (RUSSIA): I got Emperor Joe on the gat patrol. Foes that wanna make sure my casket’s closed. The Kaiser says he’s “Money Cash Hoes” — I’m from the Urals stupid what type of facts are those. If you grew up with holes in your Laptis you’d celebrate the minute you was havin’ dough. I’m like “Fuck, Sultan, you can kiss my whole asshole.” I don’t know what you take me as or understand the intelligence that the Big Bear has. I’m from rags to riches nigga i ain’t dumb. I got 99 problems but a Hun ain’t one.

Emperor Franz Joseph I (AUSTRIA-HUNGARY): In this journey you’re the journal I’m the journalist. Am I eternal? or an eternalist? I’m about to flow long as I can possibly go. Keep ya movin cause the Viennese newspapers said so. Dance — sabres rip ya pants. Emperor on the blades, ya bleedin to death — call the ambulance! Pull out my smoothbore cannon and start to squeeze — a 700-pound ball as a microphone murderin Russian, Turkish, English, French, German and Italian MCs.

Kaiser Wilhelm II (GERMANY): Got damn, I’m glad ya’ll set it off. Used to be hard, now you’re just wet and soft. First you was down with the Loubet, and now I see you in the Dardanelles with Turkey? Lookin’ like straight bozos. I saw it comin’, that’s why I went solo. And kept on stompin’, when ya’ll mothafuckers moved straight outta Salzburg.

Emperor Franz Joseph I (AUSTRIA-HUNGARY): At last, an Emperor rappin’ bout blunts and broads, tits and bras, menage-a-trois, sex in expensive cars. I still leave you on the pavement of Salzburg. Imperial palace paid for, no car payment at my arraignment. Note for the plaintiff: Your daughter’s tied up in a Budapest basement (shhh).

President Émile Loubet (FRANCE): Me and my Hessian boots do the illest things. We like to stomp out English kings with diamond rings. We slay all non-French suckers who perpetrate and lay down law from state to state.We travel on gravel, dirt road, or street. I wear my Hessian boots when I rock the Italian fleet. In Liverpool, Naples, Spain I go. It’s Hessian boots on my feet high-top or low.