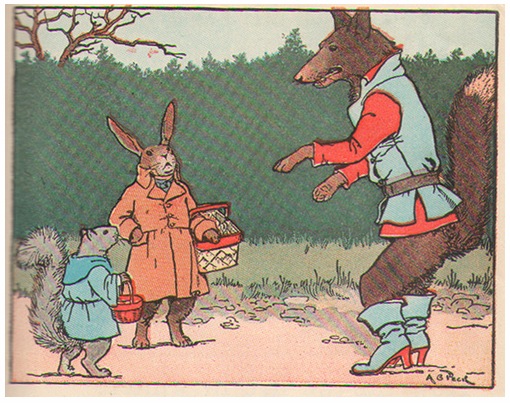 Every other Thursday, Patrick Cates (HiLobrow’s Magister Ludi) produces The Sniffer, a compendium of vulpine insight, authorial wisdom, and shower gel tastings that’s mailed to the life-loving men and women who’ve pledged at least $10 to support our serialization of James Parker’s novel, The Ballad of Cocky the Fox. (Subscriptions are still available; check in with Cates for details.) Each edition of The Sniffer features an extract from “The Cocky Companion,” a Rosetta Stone for decoding Cocky’s London vernacular. Yesterday’s Sniffer (#2) contained the following glosses on vernacular from Parker’s Fit the Second.

RUCK: In the elegant, gentlemanly sport of rugby, a ruck formally describes a phase of play that evolves when the ball drops to the feet of a huddle of players. In the ugly, ignoble world of street bastardry, a ruck is a sudden, scuffling to-do that usually involves fists to faces and boots to bollocks. Or, in the case of urban scavengers, scratches to snouts and teeth to testicles.

DUFF UP: Not to be confused with “up the duff”, to duff someone up is to give them a sound beating. It evokes dull thuds, uppercuts and temporary deafness. It is considered more polite than “beat seven shades of shit out of”.

JAFFA CAKES: In 1927, an accidental genius of a confectioner called John Langlands took a small circle of sponge, slapped on some orange goo and then concealed this visually unappealing mess with dark chocolate. The result was the Jaffa Cake, an inimitable accompanimentmto a strong cup of tea, whose mention is enough to elicit gushy sighs of longing from even the hardest of East End hard men. Tip: If you must dunk this moreish oddity in your cuppa, pull it out immediately or you’ll end up with a bittersweet citrus porridge that even a greedy fox would turn his snout up at.

HEAD & SHOULDERS: “I didn’t know you had dandruff.” “I don’t!” This irritating refrain lodges itself permanently in the eardrums of anybody who has seen an advert for Head & Shoulders, Britain’s most famous anti-dandruff shampoo. But here’s the thing. Why would you rub a foul-smelling fluorescent blue gloop into your hair unless you did actually have dandruff? Nobody has ever publicly asked or answered this question.

PRAWN KORMA: If you are within earshot of a pissed-up, post-pub curry pleb, who judges a person’s character by how pointlessly hot he likes his Indian food, and you order a prawn korma, expect to be shouted at and hit on the back of the head by a dense and doughy lump of naan bread. The yellow, innocuous and meatless prawn korma is regarded in the lore of masochistic curry machismo as nothing more than a warm seafood milkshake. If you must eat (drink) one, make sure you do so in an empty restaurant before nightfall.

ARSE: Everybody knows that “arse” is the British English equivalent of “ass”. But I can’t squander an opportunity to point out that “arse” is a much more effective phonemic representation of buttockly curvature. And while a kick in the ass is a friendly spot of slapdash horseplay, a kick up the arse is an impressively aggressive instantiation of the will to power.

SHITEY: In 1983, an Oxford professor of linguistics found himself musing upon the “ass/arse” dyad while taking his afternoon tea. His attention turned to “shit”. Here was “arse”, the expressive and determined older brother of “ass”. Could “shit” be so siblinged? After a few minutes of brainstorming and scribbling, the professor wrote and promptly underlined “shite” on his blotter. Long, elegant and powerful; just the ticket. Within half an hour he had declined it fully and given birth to “shiter”, “shiting” and “shitey”.

Each installment of THE BALLAD OF COCKY THE FOX was complemented by an issue of THE SNIFFER, a COCKY THE FOX newsletter written and edited by Patrick Cates. Originally sent only to subscribers, they are now all freely available here.