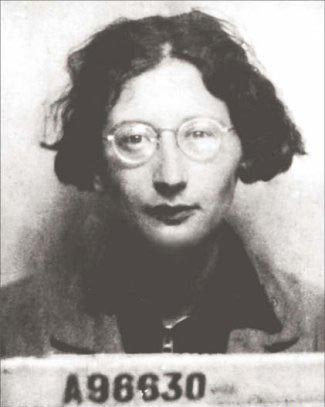 It’s difficult to know exactly what to make of SIMONE WEIL (1909-43). The Franco-Jewish quasi-Christian gnostic philosopher, anti-Communist labor activist, and rifle-toting pacifist suffered, according to ex-comrade Georges Bataille’s paradoxical quip, from a “blind passion for lucidity.” Weil’s is “the most comical life I have ever read about, and the most truly tragic and terrible,” claimed Flannery O’Connor, referring, for example, to the frail, near-sighted intellectual’s attempt to join a unit of anarchists during the Spanish Civil War, only to put her foot into a pan of boiling oil; and to her pointless efforts, during World War II, to have herself parachuted back into France — on what can only be interpreted as a suicide mission. Though the following analysis might smack of the sort of reductionism she so fiercely rejected, it’s perhaps most appropriate to describe Weil’s as an anorectic philosophy: i.e., one which revolves around a notion of the over-full self (“The self is only the shadow which sin and error cast by stopping the light of God, and I take this shadow for a being”); of truth which has grown fat and sedentary (“Perfect detachment alone enables us to see things in their naked reality, outside the fog of deceptive values”); and of eternal standards of morality buried under layers of bourgeois sentiment (“[society has become] a machine for breaking hearts and crushing spirits, a machine for manufacturing irresponsibility, stupidity, corruption, slackness and, above all, vertigo”). She was brilliant and cracked. In the end, by refusing to eat more than the Resistance could in German-occupied France, Weil succeeded in starving herself to death.