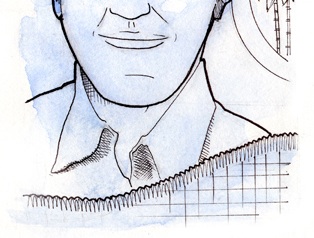 Full disclosure: I was a Nintendo kid. The 900-lb. (Donkey Kong) gorilla’s advertising in the late Eighties worked on my zygote brain until I just had to have the original NES. A couple of years later, though, a whizzing blue ball jumping around the screen of my friend’s TV gave me a sinking feeling: I’d made a terrible mistake. In 1988, YUJI NAKA (born 1965), who’d go on to be the lead programmer of the awe-inspiring Sonic the Hedgehog game, saw what became painfully obvious to Nintendo kids like me only in retrospect: Nintendo’s games were a little boring, and so slow. In fact, the beta version of Naka’s Sonic was so fast that the Sega brass asked him to slow it down — because the test players were experiencing motion sickness. Naka went on to program other games for Sega, and has since started his own game studio. But nothing else he’s done so far has approached the cultural achievement of Sonic. Don’t take my word for it, though: use an online simulator to play Super Mario Bros., then immediately play Sonic. I rest my case.

On his or her birthday, HiLobrow irregularly pays tribute to one of our high-, low-, no-, or hilobrow heroes. Also born this date: | William Carlos Williams | Ken Kesey |