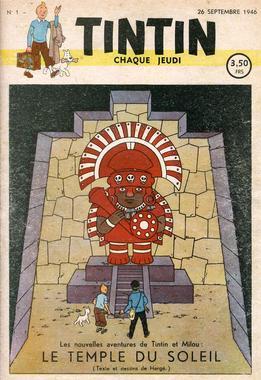 In this sequel to Les Sept Boules de Cristal (The Seven Crystal Balls), Tintin, Captain Haddock, and Snowy arrive in Peru, where they hope not only to solve the mystery of the comatose archaeologists, but also to free Professor Calculus — who has offended a lost race of Incans, by wearing a bracelet belonging to the mummified Incan king Rascar Capac, and who is going to be ritually executed — from his abductors. Narrowly avoiding death, on a number of occasions, Tintin and Haddock trail the kidnappers to a town in the Andes — where Tintin protects a local Indian boy from European bullies. The boy, Zorrino, agrees to lead Tintin and party to the Temple of the Sun, a surviving outpost of the Inca civilization hidden deep within the mountains. Captured by the Incas, Tintin and Haddock are sentenced to be burned to death along with Calculus. When Tintin learns about a forthcoming solar eclipse, he devises a daring plan to pull their fat out of the fire. Meanwhile, Thompson and Thomson search for them fruitlessly.

Fun fact: Influenced by Gaston Leroux’s 1912 novel, The Bride of the Sun. The story, Tintin’s 14th adventure, first began serialization in German-occupied Belgium, in 1943; it was interrupted when the Allies liberated the country in 1943. The story was serialized in its entirety from 1946–48. Color album published in 1949.