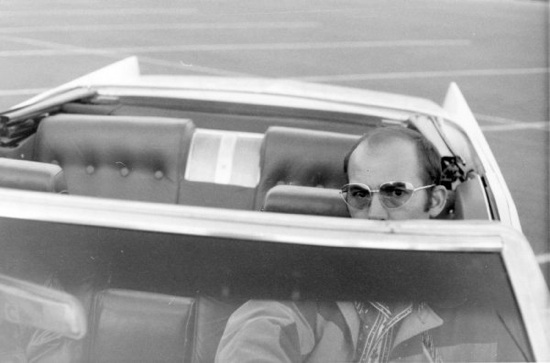 HUNTER S. THOMPSON (1937-2005) scorned the ideologies and discourses of older and younger generations alike — yet he wasn’t a cynic. His elders found him too anti-authoritarian: he was discharged from the Air Force in ’58 because “his rebel and superior attitude seems to rub off on other airmen,” which is how he ended up working as a journalist in San Francisco as the Sixties (1964-73) were starting. Thompson had little use for his juniors, either: in a May ’67 New York Times Magazine story, he praised New Left activists and absurdist Diggers while deriding the vacuous optimism of groovy Boomer hippies. But he wasn’t a liberal or a leftist; he was enough of a libertarian gun nut to admire, for example, biker gangs. (His ’66 book Hell’s Angels ended with him getting stomped by his new pals.) In 1970, a Boston Globe Magazine editor used “gonzo” — a South Boston term of admiration for a guy who’s blotto but still on his feet — to describe Thompson’s Scanlan’s Monthly story (written in a quasi-fictional first-person singular) about the Kentucky Derby. Thompson used the term, and perfected the style, in one of the funniest picaresques ever: Fear and Loathing in Las Vegas; serialized in Rolling Stone in ’71, it criticized the squandered opportunities of the Sixties. His last great work, the much-imitated Fear and Loathing on the Campaign Trail ’72 (1973), made the same criticisms. Like the America he loved and served, Thompson went downhill after the Sixties — slowly, for a decade or two, then rapidly. Five years ago, he shot himself at his rural Colorado “fortified compound.”