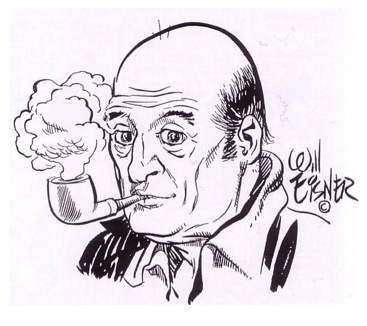 One gray late-’70s afternoon the color of a moody ink-wash, I sat in a comic-con ballroom behind two fellow fanboys who’d saved an entire seat for their pile of comics starring Blackhawk, the wartime aviator hero co-created, like so many others, in a seeming wave of the hands by WILL EISNER (1917-2005) before moving on to other victories. When Eisner took the podium and the two guys asked him why Blackhawk was no longer popular, he told them in that piping, peacemaking voice that “Blackhawk may be the most fascistic comic ever made; maybe there’s not as much market for fascism.” It was a bridge-burning, death-defying gesture to a flock of admirers, but looking back is not what Eisner did. He was there that day to promote A Contract With God, soon to inaccurately but indelibly be declared the first “graphic novel,” and he was done with the adventurers and demigods with which he helped launch the finest superhero mill of the 1940s, Quality Comics; done even with the adult-aimed Spirit newspaper supplement that first settled the issue of whether comics could be art. The Spirit was a private eye presumed dead and thus a man free of precedent, but no one is free of their past, which Eisner started bringing back to life with Contract, and his other memoirs of life in the 20th century’s ethnic tenements and its grand, sad wars. Characteristically, this pointed the way into a future of confessional, high-ambition but human-scale comics that get considered for book-clubs and Pulitzers (with Eisner departing from some of his own formative failings, evolving old racial stereotypes into a cacophonous music of polyglot urban voice). Toward the end his educative mission could quiet that spontaneous noise too far down, but he was, after all, the figure who showed most comic auteurs how it’s done. A story always headed back to its beginning, and out again to limitless ends.

On his or her birthday, HiLobrow irregularly pays tribute to one of our high-, low-, no-, or hilobrow heroes. Also born this date: Ring Lardner.